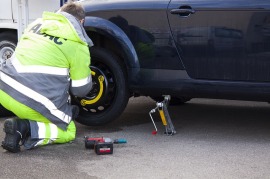 This morning as I was walking my dog I came across a car at the side of the main road, hazard lights flashing and a young guy of around 20 standing on the pavement. As I approached him I asked if he was ok.

He responded that he had a flat tyre and didn’t know how to change it as he had never had one before. I was a bit tight for time so asked him if he had called the AA or RAC for roadside assistance, to which he replied No as he wasn’t a member.

To cut a long story short I took pity on him and changed it for him (no problem for me as I have changed hundreds of wheels on all sorts of vehicles) I asked him afterwards if he had ever been shown how to do this and he said his Dad showed him when he first started learning to drive, but he didn’t feel confident enough to do the job for real. He was very thankful for my help and quickly got on his way.

As I walked on, the parallels between Business Continuity and the young guy in the car were very obvious to me. Here goes, with my thinking:-

Despite all of the above he did not have the capability or confidence to recover himself in a safe or timely manner. Luckily for him I walked past and helped him, he could have been standing at the roadside for hours.

I have helped countless organisations with their metaphorical flat tyres over the years and what I have found is that planning ahead, practicing a response to common problems and having experts to call for assistance in a crisis situation invariably gets you to your destination far quicker!

Are you ready for Business Interruption?
11th February 2020
Contact Us